You can learn a LOT about business from football. Show me a successful football coach or player, and I’ll show you a successful salesman, businessman, or both.

That’s why our BGI events often feature football legends as keynote speakers. Over the years, I’ve had the privilege of sharing the stage with—and learning from—some of the greatest names ever to play or coach the sport. And in every case, these legends have given our BGI members nuggets of wisdom you can take to the bank.

Now, “Business Secrets of Football Legends” comes straight into your living room via this all-new collection of audio CDs and video DVDs! Never before have all these names come together to share their business secrets with you—the same strategies they’ve used to earn millions of dollars for themselves and their families. Take a look at what’s waiting for you ...

Bobby Bowden: He’s the winningest coach in Division I college football history. And let me tell you—do you not get that record without skills in sales (recruiting team members), leadership (driving them to succeed), and systems (building a program that works for you 7/24/365). Let Coach Bowden inspire you and your team. Play this at your next meeting and watch your production soar! Available on Bonus DVD.

Joe Theismann: This NFL Hall of Famer and former star quarterback for the Washington Redskins is also an entrepreneur, business owner, and runs a thriving Virginia restaurant. Turn drive time into inspiration time as you listen to his success insights in the car. Available on Bonus CD.

Rocky Bleier: Another Hall of Famer, an incredible hero, and a former private client of Bill Gough. Watch and listen to Rocky’s amazing journey from near-death on a battlefield in Vietnam to four Super Bowl championships and a successful run as a serial entrepreneur. His presentation will mesmerize you and your team. Available on DVD and CD.

Terry Bowden: He’s carrying on the family business as a successful head football coach at the University of Akron, after prior stints Auburn and Bill Gough’s alma mater, the University of North Alabama. But did you know? Coach Terry is a law school graduate who also Oxford University. His super-smart talk is loaded with real wisdom you can use to grow your agency. Available on DVD and CD.

Marty Lyons: This former NY Jets defensive giant was a member of the “New York Sack Exchange,” and is now a business leader and philanthropist. As VP of Marketing and Public Relations for LandTek Group, one of the premier turf installation firms in America, Marty has combined a drive to succeed with business savvy. His talk is available on DVD and CD.

Warrick Dunn: This former Florida State standout and #1 draft pick of the Tampa Bay Buccaneers is now part owner of the Atlanta Falcons. The founder of Warrick Dunn Charities, he helps children and single parents overcome the adversities he faced as a child. His mother, a police officer, was shot and killed when he was 18 and the oldest of six children. Warrick is a soft-spoken hero and on off the field, with a powerful story to share with you and your team. Available on DVD and CD. 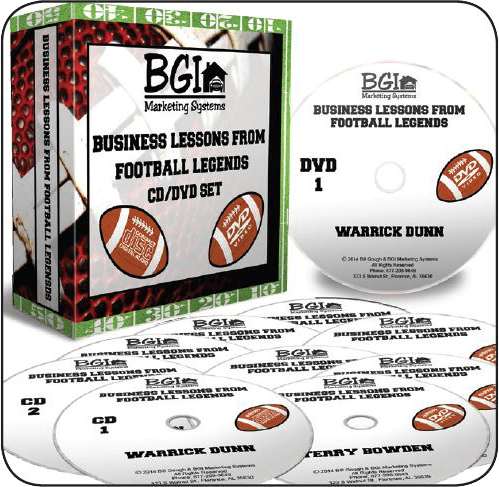 Never before have all these names come together to share their business secrets with you—the same strategies they’ve used to earn millions of dollars for themselves and their families.